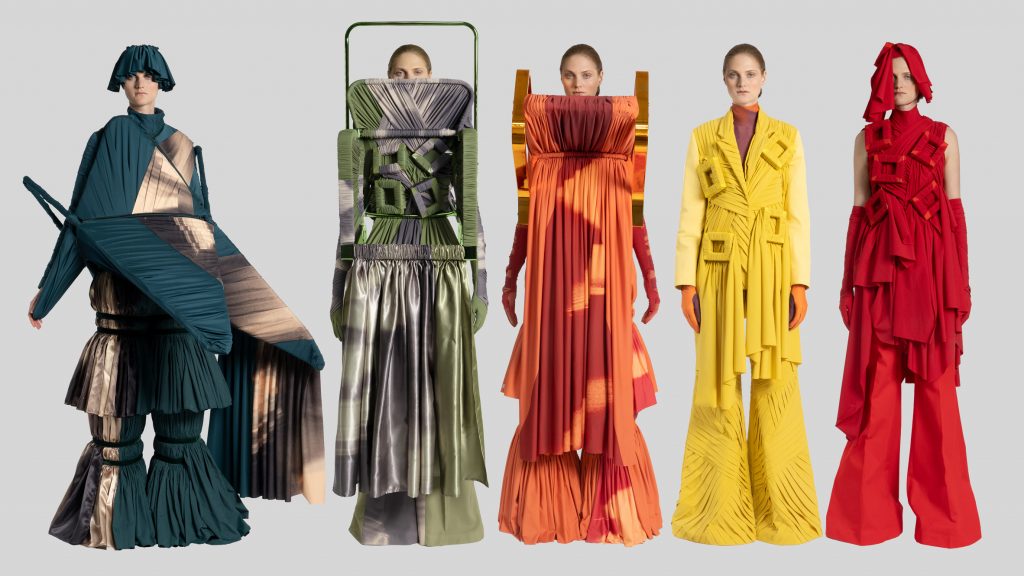 Entitled Finding Beauty and Power in Struggle, the collection is made up of five different looks that gradually become lighter and less bulky, as they gradually include less furniture elements.

Each piece incorporates pieces of deconstructed chair frames and loop-shaped elements, along with layers of lycra jersey and silk satin drapery.

In the first aspect, the entire frame of the chair was integrated into the garment, while in the second and third aspect, several parts of a frame were woven into the fabric.

The structural elements are then reduced to loop-like designs, based on the structure of the ladder-back chairs, in the latter two looks.

As the designer explains, these little square wooden curls represent “the tiny fragments of struggle left” left in the individuals – camouflaged, but still visible.

“I used the chairs to represent the fight,” Macatangay told Dezeen. “Even though a chair is made for you to rest, when you put it in a different position on a body, you give it an opposite force that becomes heavy and painful.”

“The collection starts from a large sculpture on a body, which then becomes smaller as you look”, he continued. “This means that when you face a struggle, it gets smaller and ends up being a part of your body, making you stronger, more powerful and a better person.”

For the first look in the series – the teal-colored garment – Macatangay tied several bent copper tubes to the front of a chair he had at home. The chair is known as the butterfly, or Hardoy chair, and the designer used epoxy and rivets to give the frame more volume and a more interesting shape.

The second olive green look and the third orange garment both incorporate parts of a bentwood armchair frame, which has been deconstructed and spray painted to achieve a chrome effect.

The final yellow and red looks saw the designer wrap the fabric around squares of mitered MDF wood to create loop-like shapes, before sewing them to the back and chest of each garment.

Macatangay drew inspiration from the photography of Dutch artist Melanie Bonajo, as well as the work of Austrian sculptor Erwin Wurm – particularly his One-Minute Sculptures, which see models posing with ordinary objects in unusual ways.

As Macatangay explained, the manufacturing process for each garment and the materials used were adapted at the last minute due to the coronavirus pandemic.

“Due to the lockdown, the fabric supplier I was specifically working with shut down abruptly,” the designer said. “So that made me find other options, which included dyeing most of my fabrics and digital printing some.”

“For the metal and wood structures, everything was supposed to be made from scratch using the university workshops,” he continued. “However, because the school closed and no 3D printing workshops were open, I used a lot of junk and existing chairs that I had at home.”

Despite the unexpected hurdles, Macatangay completed his collection in two months and found it adding to its value.

“The process of making and realizing these changes made me realize that this situation completely mirrored the concept of my graduating collection – finding beauty and power in wrestling,” he said.

“As I faced my disappointment with the whole situation, I found myself inspired and more resilient not to give up. I felt empowered seeing my last clothes come together under these circumstances.”

Replacing the usual physical fashion show, Central Saint Martins (CSM) in London hosted its first digital fashion show on June 17, for which students were invited to submit a 20-second video showing the concept of their collection. .

This led Macatangay to focus less on how the clothes would move and more on the many details that make up each look. 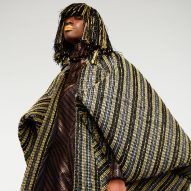 “To present my work digitally, I had to completely change my way of thinking,” he explained. “I had to think more strongly about how people would consume my work, and less about the timing of the parade.”

“[The show] was amazing, one of a kind and just very relevant, ”added the designer. “I think CSM has found the best alternative way for us to communicate our work in a way that everyone is now used to.

Macatangay is just one of the many fashion students at CSM who have incorporated unusual materials into their collections.

Benjamin Benmoyal used recycled cassettes to make the fabrics for the “utopian” clothes featured in his It Was Better Tomorrow collection, while Chloe Baines used recycled tents and metal pegs left at music festivals to create different clothes and jewelry .